A trip to Ostend

Oostende, or Ostend in English, is a seaport city in West Flanders, between Zeebrugge to the northeast and Dunquerke, in France, to the southwest. With a population of just 70 thousand, a maritime setting with fishing industry and long sandy beaches, Ostend is a popular summer holiday destination for the Belgians. Recently it has also started sporting a pretty good beer scene, which was an added attraction for me when I found myself in Brussels with a couple of days to kill.

Ostend is the end station of a more or less direct railway line from Brussels. You can get there, without changing trains, in less than one and a half hour. Which is hardly longer than when going to Bruges. And with trains departing hourly from Bruxelles-Central it's both fast, cheap and easy to get to Ostend for a daytrip or for staying a few days.

The railway station in Ostend, a beautiful, baroque style building from just before World War One - a sightseeing target by itself, is located right next to the harbor in Ostend, within easy walking distance from a number of hotels along the Visserkaai and old town Ostend.

Ostend has a fairly small old town, roughly a square of 0.5 km times 0.5 km - fenced in by the sea to the north, the harbor to the east, the Mercator yacht marina to the south and the Leopold II-laan to the west. Old town is basically where all the fun takes place, so you can easily get around on foot to visit the attractions, stroll along the beaches or out on the long Westerstaketsel - the Western Pier.

If you're interested in history it's also worth mentioning that the beaches of Ostend are lined with old bunkers from World War Two, built by the Nazi German authorities as part of their defenses against an Allied invasion - the so called Atlantic Wall. There is also a restored fort from the Napoleonic Wars, which is open to the public and even has a brasserie that is open all days, except Mondays, from April 1 to October 31.

Since June 2007 a free ferry service, the Roger Raveel, takes passengers from the city side to the fish market east of the harbor. On that side you will also find the aformentioned Fort Napoleon as well as the dry docks of Industrielle des Pêcheries - where, on my visit, the fishing vessel Marbo Oostende had almost overturned and destroyed parts of the dock.

If you consider going to Ostend in May, beware that the last weekend of May is when the annual Oostende voor Anker or Ostend at Anchor festival is held. This festival sees the population of Ostend grow from 70 thousand to several hundred thousands. Things will become more crowded and noisy then, with live music competing with the noise of steam driven cars, and there will be a hundred market stalls along Visserkaai, selling freshly cooked seafood, dried or smoked fish, artisanal cheese and produce, clothes, ropes and what not.

Another good reason for coming to Ostend is to explore some of the beer and food places that have popped up the last few years - from beer pubs such as 't Kroegske, Café Bottteltje and 't Eilandje to the highly acclaimed beer restaurant De Bistronoom.


Located on Louisastraat 19, north in Ostend, Café Botteltje is an English style pub, with heavy wooden furniture and wooden panels on the walls. The beer selection, however, is very Belgian with 13 beers on tap and more than 300 types on the bottle menu. The place also sports a big genever selection, but I stayed with the beer.

During my visit, Botteltje had the refreshing Lefebvre Hopus on draft, as well as the delicious St Bernardus Tripel, La Trappe Dubbel and La Chouffe. The service was surprisingly fast, not typical for Belgium, with a waiter stopping by my table almost instantly when I had drained my glass. That's a big plus in my book. As for the food they served I went for their beer dinner, where each dish is paired with a beer (you get a glass of that beer with the dish). It was really well made, though some of the beer and food combinations were more OK than good.

All in all, if beer selection is what you're looking for - check out Café Botteltje.

A great place to go for lunch or dinner is De Bistronoom in the south of Ostend, on Vindictivelaan 22, overlooking the Mercator Yacht Marina. This place opened up three years ago but has already caught the attention of the RateBeer community, earning the restaurant a spot in the short list of the world's Best Beer Restaurants 2012.


De Bistronoom is owned by Christophe Pelfrène, the former chef of Ostende Queen, who has got what must surely be the biggest selection of 75 cl Belgian beer bottles - in his own words about 250 types! But he stresses that De Bistronoom is a beer restaurant, not a beer bar, so any RateBeerian who comes asking for a beer will politely be asked to visit one of the nearby pubs instead.

As chef for the De Bistronoom, Pelfrène enlisted the help of his girlfriend, Stefanie De Vos, who makes really subtle, regional dishes, nothing too spicy, that goes really well with Belgian beer.

Despite having two small children together, the youngest just a few months old, the two keep the restaurant open and running on all days, except Tuesdays and Wednesdays. They serve lunch from Noon to 2 pm and dinner from 7 pm until 9 pm. There is no a la carte menu because Pelfrène relies on what he can find fresh that day - typically fish fresh off a fishing vessel, before he and De Vos compose the lunch and dinner menu.

What I really liked about De Bistronoom, except for the delicious food and beer pairing - of course, was the relaxed atmosphere and how Pelfrène would come out with each dish, tell us about it and then inform us about the choice of beer. At the end of the night I felt like I was visiting the home of a friend, being served their homecooked food and beer from the cellar and chatting with the owner as if we'd known each others for years.

I just can't recommend De Bistronoom highly enough, this really is one of the best beer restaurants in the world. It's no wonder Chris Lively of Ebeneezer's Pub has asked them over to Maine to cook for him!

The final place I'd like to mention (I missed 't Kroegske because they closed earlier than I thought) is a beer bar on the east side of Ostend, near the harbor and Visserskaai, in Bonenstraat 5: 't Eilandje. 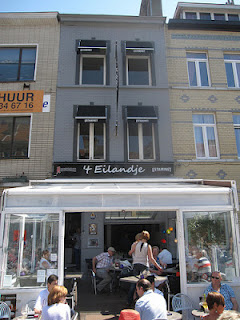 't Eilandje, which means "the island", opened up in June 2011, so it’s a fairly new pub. But its atmosphere radiates old days, I'd say the 1940s or 50s, from the low, old-style jazz music they play to the decoration in the pub. It’s really a cozy and quiet place to sit down, and the guests are a bit more adult than at other pubs in the area.


Just like at De Bistronoom, a married couple is running 't Eilandje. Both seem very proud of their new place and took time to talk with us and tell us about the place and the beers they've got. They told us they had kept asking Rodenbach to send them kegs of Rodenbach Grand Cru and that Rodenbach finally gave in and now sends them kegs of this delicious beer on a regular basis.

The beer selection is limited, but pretty good. In addition to the Rodenbach Grand Cru they usually have the Goliath Tripel on tap and close to 30 different bottled beers, including St Bernardus Abt 12 and six of the seven trappist breweries (Westvleteren is the only one missing). In the summer season they've got an outdoor area, on the square, where you can sit and smell the salty sea air from the nearby harbor and watch the Ostenders walk by.

't Eilandje is a small but great and friendly beer pub.

Photos from the visit to Ostend at Flickr: Botteltje, De Bistronoom, 't Eilandje and Ostend.