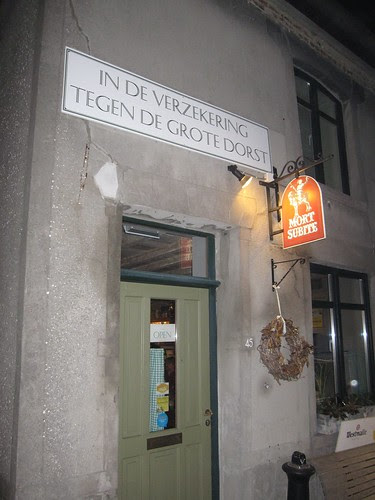 About 15 km west of Brussels in the heart of Pajottenland in the Flemish Brabant region of Belgium lies the small village of Eizeringen. It may not be a place you've heard of and you will be forgiven for driving past it without noticing. But it has something quite unique to offer, the world famous sour ale café In de Verzekering tegen de Grote Dorst, which is Flemish for "In the insurance against great thirst".

The story of the café goes back a little more than a decade to a remarkable woman named Marguerite. In October 1999, the then 85 year old Marguerite said to her faithful customers that on Christmas eve she would uncork her last bottle of beer. She had kept the local pub open for more than 51 years, but age was finally catching up with her. Things were looking bleak for the only pub left on the village square in Eizeringen.

Fortunately, two brothers decided to step in and save the old pub. Although both Yves and Kurt Panneels had full time jobs, Kurt as a garden architect and Yves running a communication consultancy, they decided to give it a try. They painstakingly restored the pub to look like a classic Flemish café of the 1940s and 50s, with a beer cellar full of great sour ales. By keeping the pub open only on Sundays, from 10 am to 1:30 pm, they could continue their full time jobs while also still be able to keep the village pub going.

Today, In de Verzekering tegen de Grote Dorst is a must to visit for any budding sour ale lover, so it was with great anticipation I opened the door, shortly after 7 pm, during a "secret" BBQ event on Friday March 2nd, 2012. 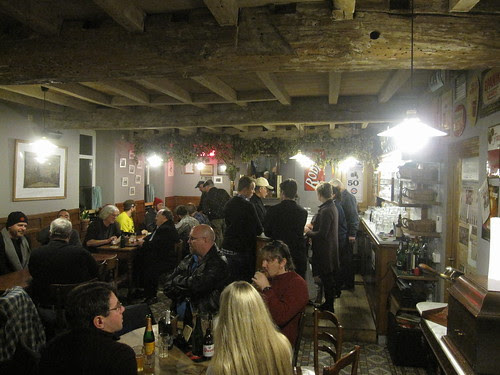 What greeted my senses was a blast from the past, this really is a World War Two café. The atmosphere was quiet and familiar, with no music on loudspeakers, just some low chatter. The celiling was held up by large, well worn, wooden beams, decorated with dried hops. The furniture was likewise old and of wood, while the walls were decorated with empty beer bottles and old beer plaques.

As for beer, the café has an impressive sour ale cellar with bottles dating back severeal decades, often from breweries that has since gone extinct, such as Eylenbosch, or been bought up to become pale versions of themselves, such as De Keersmaeker Mort Subite.

As mentioned above, this was a special event. Usually the café is only open on Sundays, but because two large tour groups - an American and an Italian - wanted to visit the café, the Panneels decided to throw a "secret" BBQ event. For this event they had also gotten hold of 1 and 2 year old lambics from De Troch, Girardin, Lindemans, Timmermans and Oud Beersel, which they served out of casks in their garage. 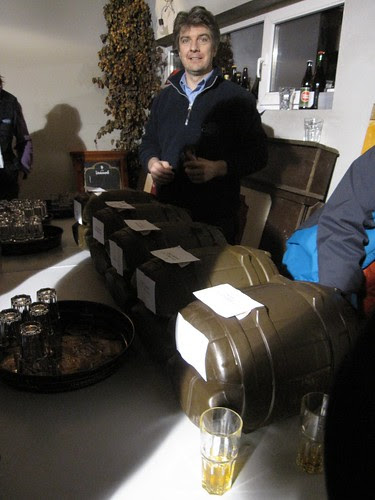 This photo shows Yves Panneels and German geuze blender Uli, of h.ertie fame, helping him serve lambic in the garage of the café. The reason for using the garage was partly to reduce the queues inside the small café but also to keep the cask beer cold (the local air temperature was a perfect 9 degrees C that night).

I tasted all the different lambics and they were really different, both in age and expression. Some, like the Girardin and Timmermans lambics, were still fruity and mildly sweet, while others, like De Troch, had turned funky and pretty sour.

Inside the café it is worth looking through the extensive bottle menu, but beware that not everything is listed so you may want to ask the bartender if you're looking for a special brewery or vintage. If there is a place that could have a rare vintage sour beer, it is here!

Together with a group of friends I shared a number of rare bottles, including a 1988 Mort Subite Oude Geuze made by Brouwerij De Keersmaeker the year before they were bought by Alken-Maese. I also got to taste two new American "lambics" - two of the Coolship beers from Allagash Brewing Company in Portland, Maine: Their 6,6% abv Coolship Resurgam geuze and the 5,7% abv Coolship Red raspberry lambic. Both were simple but impressive for such a new sour ale brewery. 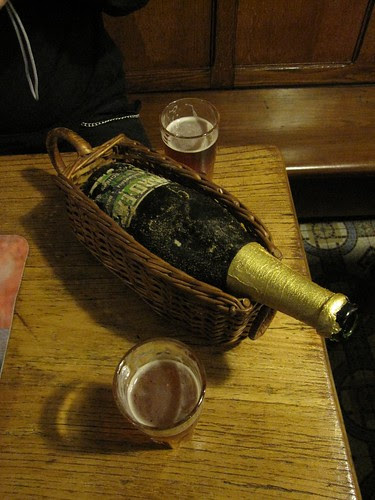 For me, the grand finale came with this bottle of Eylenbosch Faro Extra 1988, and for only 14 Euro it was a bargain. After 24 years the beer poured as clear as the day, with a red tinged golden color. The aroma was more like a fruity Sherry than a sweet faro and the taste was vineous with dried fruits and Sherry like notes. Smooth and harmonic. Delicious.

I will definitely be back for more sour ales at In de Verzekering tegen de Grote Dorst, but most likely on a Sunday.